with his wife Wu Chu Yin
"Death is no cause for sorrow; sorrow is reserved for having lived without benefiting the world." 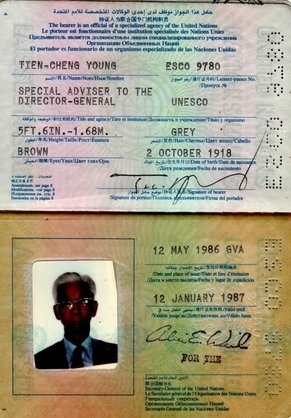 TC Young's last U.N. Laissez Passer
T. C. Young was born on October 2, 1918 in the rural village of Nan Cheng, which is now part of the port city of Lian Yun Gang, Jiang Su province, China. Through with a strong will to succeed, he was able to leave Nan Cheng and become an accountant in Shanghai.  Through the sponsorship of the Kuomintang government, in 1941 he became an intern to the U.S. Bureau of Budget during the Roosevelt and Truman administrations.  In 1947, he earned a Master in Public Administration (MPA) from Harvard University. He was very proud of having heard Secretary of State George Marshall give his speech on the European Recovery Program. He then started a long career with the United Nations.  He began as an accountant at the UN Headquarters in New York. In 1949 he was sent to Paris as part of the UNESCO start‑up team with diplomatic status.  UNESCO is a United Nations agency that focuses on education and culture. In 1956, while working at UNESCO, he earned a PhD in Public Administration from New York University Wagner School of Public Service. At UNESCO, he rose through the ranks of Bureau of Budget. He became the Director of Budget then Undersecretary to the Director General. In his 35 years with UNESCO, he had worked closely with 5 of its Director Generals in particular Rene Maheu and Amadou M’Bow. He retired in 1984. Upon retirement, he remained associated with UNESCO at a salary of $1 per year in the capacity of  Special Advisor to the Director General. In 1984 he was also nominated as of one of the representatives of Jiang Su province to the Annual Meeting of Provincial Delegates in Beijing. At the same time he moved permanently from the Paris suburb of Sevres to Cannes in southern France. He passed away on June 24, 2000 in Shanghai from cancer. The Chinese government recognized his lifetime contributions to China and honored him as he rests in the BaBaoShan National Cemetery in Beijing. 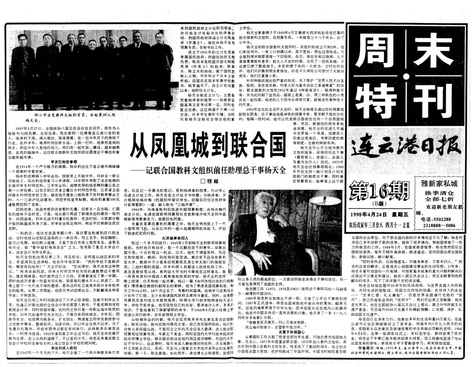