杨天全 基金会
"There is no such thing as good fortune or bad luck."

​Shaowen Yang, a TC Young scholar: Life is a choice

Shaowen while attending HEC
Maybe one day, you will get interviewed by a journalist and the question is: in your eyes, what are the components of life?  You may reply:’ life is composed of family, friends and strangers; tears, frustration and smiles; routine, surprise and perseverance…’

Ten years ago I perhaps would tell you something alike.  But now, if it were my turn, my answer would be: life is composed of choices.  Every choice that we make changes not only our own life, but that of others.  A choice means hope and future.  A choice shows understanding and generosity.  Mr. T.C. Young established his foundation to grant scholarship to young people who yearn for progress in education and career.  His choice impacted my life definitively.

In 1999, when the world was at the dawn of a new millennium, I was also thinking about my professional goal.  A Bachelor Degree in English Language and Literature opened the door for me to the sphere of international enterprises in China.  However, without a solid and specific academic background, I was not able to define my career orientation and accede to the management.  I decided to pursue an MBA program abroad.  France became my first choice as I have already had experiences with two French companies, Saint-Gobain and Alcatel.  After going through the selective application procedure, I was admitted to HEC Management School in Paris in September 2000 and the scholarship from T.C. Young Foundation helped me cover my tuition.

Sixteen-month MBA study remains unique for my life.  Students from more than 20 countries gathered in the same amphitheatre to broaden understanding of business world, learn how to be an ambitious leader, and at the same time, keep the role of a successful team player.  Not having to travel around the world, I had the chance to see different cultures, cope with varied management styles and enjoy fresh viewpoints from classmates with diverse background.  Just imagine a group of participants from China, Italy, Russia, France and Mexico working on a case on new marketing strategy of Land Rover, the discussion was sparkling with original ideas for each of us as individual.

After the demanding core phase which contained the fundamental business subjects, I chose the track of finance as I found myself particularly attracted by financial analysis.  I would continue my career in the financial function of industry companies.   Through case studies, I tried to go beyond the numbers by putting myself in a real-life situation, offering appropriate interpretation of figures and the corresponding amelioration suggestion, from which I felt a sense of accomplishment. 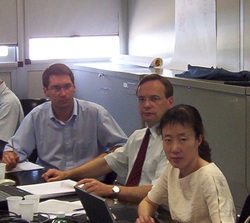 Shaowen on her first job in France
My first job in France was plant controller at Glaverbel, a glass manufacturing company, a challenge again for me, as I restarted my career in a new country and a new field.  The post of controller requires not only analytical competence, but also communication skills.  I should convey clearly my ideas and convince people to accept them.  The capacity of adaptation that I acquired during MBA programme helped me face difficulties with calm and independence.  I enjoyed surmounting the obstacles to achieve my objective.  Five years as plant controller allowed me to get acquainted with the whole process of industrial controlling and made me prepared for higher responsibility.  I obtained the position as corporate controller in one of the divisions in Air Liquide, for which I work with more than twenty subsidiaries in the domain of general expenses and intercompany flows.  After these years, I am confident in my future towards a more strategic and managerial role.

If you think that the scholarship from the foundation only brought me success in my career, you would be only partially correct.  With all these changes in my life, what the scholarship gives me is the chance to see the world through a different eye, the courage to overcome the fear, the curiosity to learn, and the philosophical vision of life itself.  Before my arrival in France and MBA programme, I only spoke several words in French.  Now French becomes my third language and I become a part of French society.  Before my arrival in France and MBA programme, it was my first time abroad.  Now I am working with people even from the other end of the world.  Before my arrival in France and MBA programme, I concentrated more on myself, my own career and life.  Now I realise that life is more meaningful when we pay more attention to others and promote education and other good cause which are essential for our society. 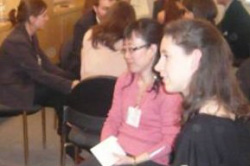 When I look back on my life, although I am not old enough to do so, I would say that what I have received is not a scholarship, but a choice, a choice of always aiming higher nobly in life for all others that are in need and what I have learned is to make such choices in my life.